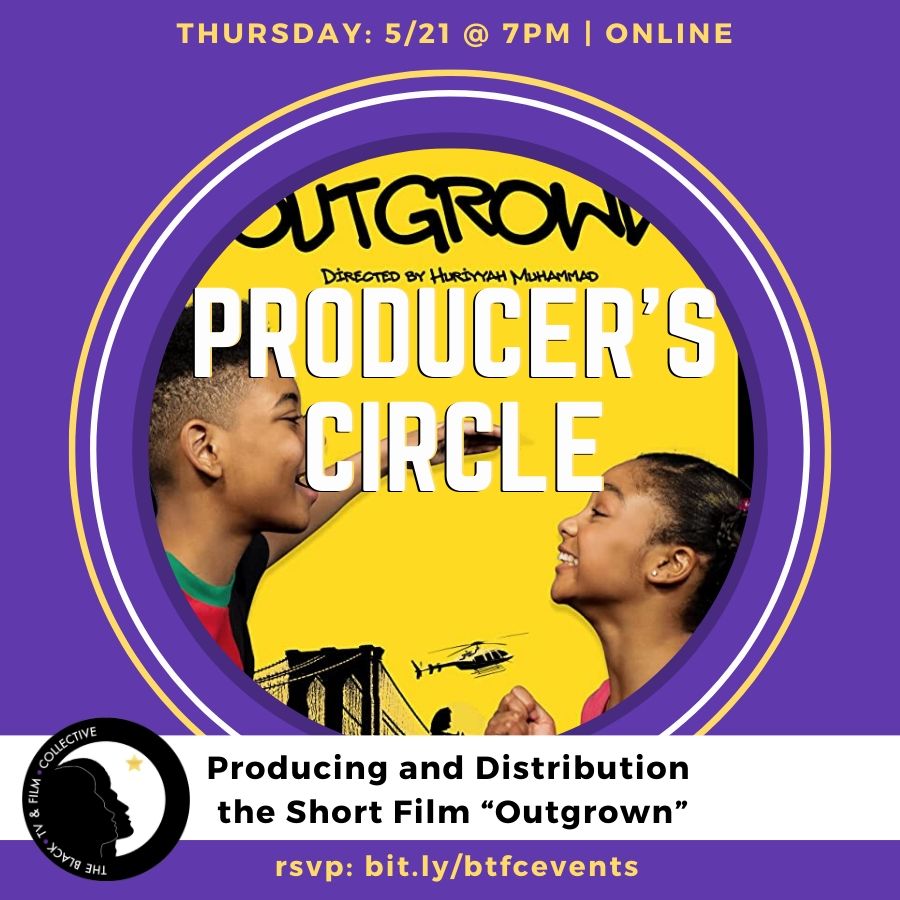 Producers of the short film, “OUTGROWN”, Sam Hicks & London Williams join us for a conversation in the Producer’s Circle. During the discussion Sam and London will share key learning from producing and distributing the short film. Outgrown has won multiple awards and played in over two dozen film festivals around the world.

It is now pending release on a streaming platform.

Formerly at Cheddar, a business news network, Hicks served as a cinematographer for interviews and packages featuring CEOs of Fortune 500 companies like Microsoft and Delta. Through grit and determination built over the years propelled Hicks to produce two short films while in New York: “Outgrown” and “Varnel.” Both were created by predominantly black film crews and featured black cast members, which led to the idea behind a new production company in Los Angeles, CA. With Samshotit, Hicks plans to bring new, authentic perspectives to black cinema through compelling stories and visuals.

The award winning film “Outgrown” has screened at over 2 dozen film festivals and recently secured a 3 year licensing deal with Up Faith & Family TV.

Learn more about independent producing as discussed in the ABCs of Producing.

Interested in becoming a producer? It’s time for a Producer’s Circle Career Lessons Session. In this session, we discuss career lessons with BTFC members, Sam Hicks and London Williams.

London Williams is a filmmaker/sports and entertainment executive that was first introduced to TV and Film as a floor manager for Dallas Community Television (formerly Cable Access of Dallas). He also spent much of his early career at Project FX Productions where he wrote and produced theater. He then went on to oversee the promotion, touring, and publishing divisions of SE Presents, Inc., a company that produced artists, concerts, and comedy shows. London attended the Digital Film Academy of New York conservatory program. London produces for Williams Family ABE (Arts-Business-Education) focusing on societal impact films. London also has a Doctorate in Business Administration and an MBA in sports and entertainment management.

Having produced over four feature films, four short films, and a tv series with distribution in the past three years, London is poised to continue thriving and contributing to the film industry. London served as the producer on OutGrown which recently secured a 3 year licensing deal with Up Faith & Family TV.

The definition of an independent producer varies depending on whom you speak with, but after 10 years of producing, several feature films, an international doc, many shorts and web series under my belt, I will put it like this….the Producer is the Leader. He or she is the person who feels enough responsibility for the project and people involved (in front of and behind the camera) to keep going, to find a way “to produce what before was not,” no matter what. They see it through.

It’s a tough job. But, it’s worth it when the audience is sitting in that theater watching what YOU made happen. No better feeling in the world.

Our goal is to make sure our members work gets made, and every production is a success. Calling all Leaders.

At these meetings, we’ll touch on topics such as scheduling, budgeting, marketing, and more.

***IN AN EFFORT TO PREVENT THE SPREAD OF THE CORONAVIRUS (COVID-19) THIS EVENT WILL BE HELD VIRTUALLY. PLEASE RSVP AS USUAL. LINKS WILL BE EMAILED***