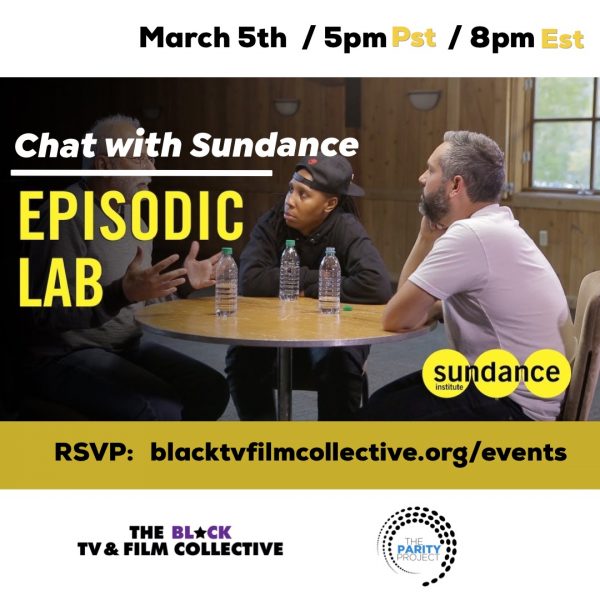 Do you have an original pilot, or idea for a series? Thinking about or planning to apply to the Sundance Institute’s Episodic Lab? Then join the Black TV & Film Collective and the Parity Project for a virtual conversation with Iz Rubenstein, screenwriter and the Manager of the Episodic Program at the Sundance Institute to chop it up about this great program, application dos and don’ts, career strategy and more.

About the Sundance Episodic Lab

Offering one of the few training grounds for independent voices to develop an original series and pilot script, the Sundance Institute Episodic Program provides artists with the tools, training, and industry access to move their projects and careers forward.

Launched in 2014, the Sundance Episodic Program is an entry point and sustaining force for emerging episodic writers and creators across all platforms. Through a rigorous lab experience and customized year-round support, the program provides artists with the tools, training, and industry access to move their careers forward. The Episodic Program supports one unified Episodic Lab with two unique tracks, the Episodic Lab: Pilot to Series and Episodic Lab: Idea to Pilot. Our series track centers around revising a pilot and refining a professional pitch, while our idea track focuses on taking a concept from the early stages of development all the way through to a polished draft.  Both programs are immersive two-part experiences that begin in the fall, offering writers an opportunity to workshop an original pilot to develop their writing and pitching skills. Working with accomplished showrunners, producers, and executives, the fellows participate in creative workshops, receive feedback on their projects, and engage in simulated writers’ rooms to break story in a collaborative space.  Fellows reconvene in the spring to receive feedback on revised drafts, work on their pitch process, and meet with creative executives and producers to discuss the industry landscape.

About The Parity Project

The Parity Project advocates for fair economic and narrative inclusion and equity of black artists, executives and representatives in television and film.

We are fighting to ensure that all black entertainment professionals, including writers, directors, actors, cinematographers, editors, executives, producers and representatives, reach parity in the market that’s on par with our population in the United States through: career mentorship,  collaboration, accountability, networking, equal and fair representation, training and education.

About the Black TV & Film Collective

The Black TV & Film Collective is a 501c3 development and production hub with a simple mission: to create career advancing opportunities for Black and African Descent artists to achieve financial sustainability within the entertainment industry.

We provide critical production support enabling members to build a strong body of work, supplemented by workshops and labs focused on craft development and networking events to foster relationship building.

There is power in numbers and together there is unlimited potential in what we can achieve.