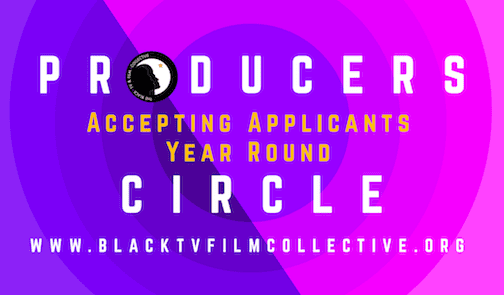 ***APPLY FOR THE PRODUCER’S CIRCLE***

Join our information circle for the launch of the Black TV & Film Collective’s Producer’s Circle.

In 2020, the Black TV & Film Collective will select up to 10 narrative producers to actively support and engage as they take their projects through the phases of production, starting with the production of a proof of concept.

Meeting bi-weekly, the Producer’s Circle will assist in the development, prep, production and post of a project. Along the way, we’ll introduce you to industry leaders and experts, as they offer access and mentorship toward making your feature. Along the way, we will assist you in the production of a proof of concept that can be used to assist in attracting the necessary human and financial capital to complete your full feature.

As with everything we do, the aim of this lab is to aid our members in achieving their professional goals. With our Collective based approach, this circle of experienced producers is here to help you achieve success.

We want to see you win. That’s what we’re here for.

– At least three producing credits (from associate to producer)

– Previous work samples for both you and the project director

– Commitment to the completion of deadlines within the program **

Every second and fourth Tuesday of the month from Oct through Dec. Afterwards, ongoing as necessary depending on the project.

– There will also be work assigned during the off weeks

– Producers must NOT be the writer or director of the project

– Both producer and director must have work samples

– Producer must have legally optioned the narrative screenplay

About the Black TV & Film Collective:

We are a leader in NYC for attracting, engaging and creating opportunities for talented storytellers of color in the fields of television, film and digital entertainment. We function in three key areas: