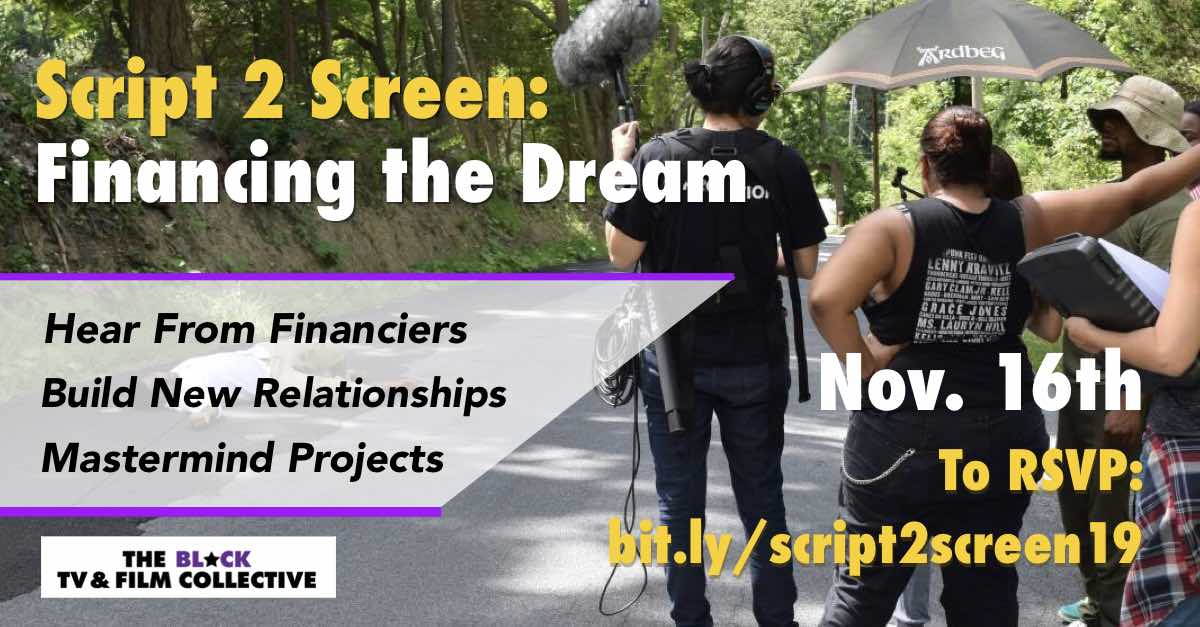 The Black TV & Film Collective’s 3rd Annual Script to Screen will focus on leveling up in our careers and the critical aspect of film finance.

The one day event, held with support from the Made in New York Media Center, will feature the following workshops and panels:

Joseph Plummer (Wavelength Pictures): Joe Plummer is currently the Producer for Wavelength Productions and oversees all in-house production, development, investment and co-production of their films. Titles from the production company ever growing library include the award-winning films WONT YOU BE MY NEIGHBOR? KNOCK DOWN THE HOUSE, NIGHT COMES ON, WHERE’S MY ROY COHN and many more.

Josh Penn (Department of Motion Pictures): Josh Penn is a producer with the Department of Motion Pictures. He produced BEASTS OF THE SOUTHERN WILD (2012), which won the Sundance Grand Jury Prize, the Caméra d’Or at Cannes, and was nominated for four Academy Awards (including Best Picture). In addition, Josh was nominated for Outstanding Producer at the 2013 Producer’s Guild Awards. He has also held producing roles on MONSTERS AND MEN (Sundance 2018 Special Jury Prize Winner) PATTI CAKE$, WESTERN (Sundance 2015 Special Jury Prize Winner), THE GREAT INVISIBLE (SXSW 2014 Grand Jury Prize Winner), CONTEMPORARY COLOR and the live documentary A THOUSAND THOUGHTS among other films. In 2018, Josh was accepted as a member of the Academy of Motion Picture Arts and Sciences. Outside of his work in film, Josh was previously the Michigan New Media Director for President Obama’s 2008 campaign and a Senior Digital Program Manager for the 2012 re-election campaign.

The narrative feature film Farewell Amor is currently in post-production. The filmmakers raised + $1M . How did they do it? They started three years ago with a short film as a proof of concept and kept going until the film was in production.

Ekwa Msangi (Writer, Director, Producer) | Ekwa has written & directed for both film and television, and is currently in post-production on her first feature film, FAREWELL AMOR which was awarded the 2018 Jerome Foundation Grant, Tribeca All Access Fellowship, Cine Qua Non Lab Fellowship, IFP/No Borders, and Sundance Feature Film Development Fellowship. In the past Ekwa has been adjunct faculty at Tisch School of the Arts, as well as a recurring mentor in Mira Nair’s East Africa based Maisha Screenwriting Labs. Currently Ekwa is the resident educational instructor with the African Film Festival, and teaches Screenwriting at The New School and Feirstein Graduate School of Cinema, Brooklyn College.

Yes, its true. Business attracts business. But when is the right time to launch that formal venture? Are you partnering with a creative collaborator? Are you optioning a script, lending yourself to a production or forming a co-production? Hear from entertainment attorney Janine Beach on the critical legal considerations to make BEFORE filing those articles of incorporation.

What you learn could save you valuable TIME and MONEY! Be sure to come prepared with questions!

Janine Beach is an entertainment lawyer based in New York and Toronto. She is the founder and principal of Phoenix Entertainment Advisors, a law practice and strategy consultancy, and of counsel at Nevin Law Group. Phoenix acts as production counsel for feature films and represents creative talent (actors, directors, writers and personalities) across film, television and digital media. Phoenix is especially proud to represent diverse clients in international markets. Janine launched Phoenix after ten years in entertainment law and media strategy in Los Angeles, New York and Toronto, including work with award-winning clients and projects. She holds a JD and MBA from Columbia University and a BA from McGill University.

Building relationships and trust with financiers start with your ability to tell your story confidently and effectively. What are the key takeaways you want financiers to remember about you? What should they remember about your project or your creative collaborators? At its heart, pitching is a conversation that tells a story.

Come and pitch your project (5 mins) and receive on the spot feedback from our panel of pitch experts.

How the Pitch Works: Pitch slots available on a first come first serve basis, but must be signed up for in advance. After buying your ticket, email us your ticket number and request a slot. Further instructions will be sent your way.

This fun event will be organized to maximize everyone’s time so at the end of the evening, you should have a refreshed, fully stocked list of new connections.

Hope to see you there!